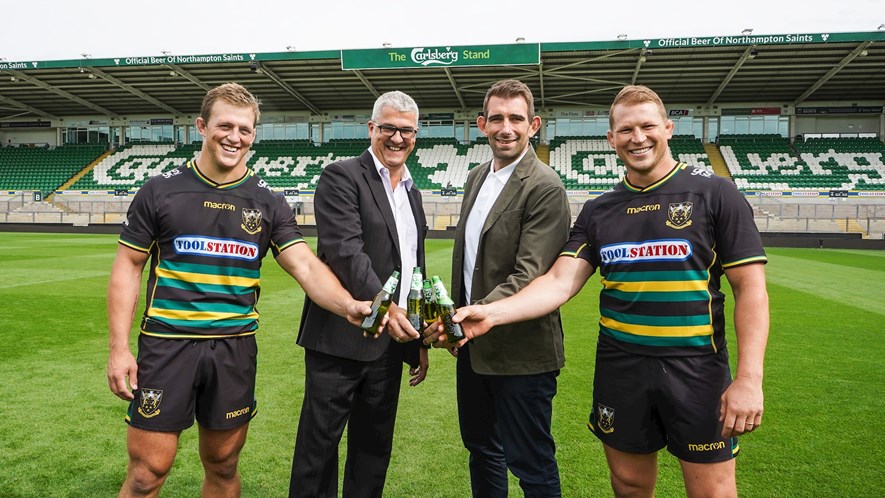 Carlsberg UK has been an Elite Sponsor of Northampton Saints for over three decades, and as such is one of the Club’s most important and valued partners.

A new agreement was signed last year that saw Saints and Carlsberg UK extend their relationship until at least 2025.

The rebranding of the old Tetley’s stand, which Carlsberg UK have sponsored since it was built in 2001, has been accompanied by investment from the brewer into the cellars and bars to improve quality, minimise wastage and reduce queuing time.

An improved range of beers and ciders including Carlsberg Export and Brooklyn Lager will be available for supporters to enjoy before, during or after the game.

Bruce Ray, VP global corporate affairs at Carlsberg UK says “We are delighted to, once again, celebrate our long and successful association with the Northampton Saints, in opening the new Carlsberg stand at Franklin’s Gardens. As two iconic names within the Northampton community, we have shared championship winning successes, and sometimes commiserated those that could have been.

The change of name to the Carlsberg stand from Tetley’s, is significant for both parties. The Carlsberg name has been part of the town since the 1970s, and we live in an ever more global world, where brand recognition and reputation is key to attracting and retaining fans. We also hope that regulars to the stand will quickly come to recognise the new name as an integral part of the club. And rest assured, Tetley’s bitter is in good hands as we invest in new brews and promoting it in its heartland of Yorkshire. We welcome one and all to the new Carlsberg stand.”